Originally I asked Steve from Diamond Glaze to come around and quote for 4 garage windows that had been broken in a storm on the back of a Facebook Group recommendation, the previous double glazing company recommendation had already taken 3 months to replace the glass after agreeing a price so when Steve quoted less than the original double glazing company and said he could do it within a week as it was a small / quick job I was delighted and agreed for him to do it instantly. 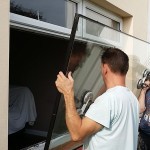 Steve and his team replaced my 4 garage windows and cleared up after themselves beautifully, the quality of the windows and mastic work on later inspection was great (even on an outside garage). As he was leaving I asked him to quote for a new front door and side window, I received the quote after being given lots of options regarding my new front door and was so impressed I requested a quote for the full house to be double glazed (8 windows). The quote seemed very reasonable and with such great advice I accepted it and agreed to the work to start as soon as they are available. I was scheduled in after choosing my handle colours, obscure glass types and opener options. 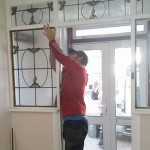 The front door and side toilet window were fitted initially which looked very good and instantly got house visitors asking about the door as they were so impressed. When the day of the main window installation came Steve admitted to me that there was an admin error and that the wrong colour handle was ordered and fitted to the windows, I actually couldn’t even remember what colour handles I had requested and even though they were willing to change the handles over at their time and expense I was more than happy with the handles that were on the windows and think I actually preferred them to the ordered ones. This demonstrates the honesty and integrity of the company as they could have easily said nothing, not admitting the mistake and I wouldn’t have been any wiser, the fact that they told me the mistake and offered to remedy it shows you that they are a trustworthy company.

All windows were fitted perfectly and look great now, the sound-proofing aspect to the windows are far-superior to the previous cheaper windows they replaced . During the window installation I watched them fill the voids with expanding foam and complete the minor repairs on the window ledges and was impressed by their attention to detail. Amazingly they even re-grouted a bathroom floor tile that I pointed out in conversation (that was nothing to do with them) as they re-grouted a few bits of tiles on the ledge when the bathroom window came out.

We have used Diamond Glaze on 3 occasions. The first occasion was to replace a bathroom window which had broken.  We found their advertisement in the Post office and were pleased at their punctuality and workmanship.

Some time later we decided to have our windows replaced and used them again and were very very pleased with what we had done.

Our last acquisition was a front porch and found Steve very helpful in his advice.

There has never been any dispute over things needed to be done, even when we found we needed to alter something it was done without quibble.

I have recommended Diamondglaze to many people. I prefer to use local tradesman and DiamondGlaze has fulfilled my trust. Even to doing little other jobs,that were not in their remit,it has simply added to my satisfaction of using them.

They have approached the work in a very friendly and courteous manner and their workmanship has been of high quality.

The company they use, supplies a high quality product.

To be honest they are not the cheapest but their price reflects high quality work, neither are they the most expensive as a well-known brand was a lot more.

I used a “cheaper” company some years ago and the old saying “You gets what you pay for” comes to mind.  In that instance the small personal touches were clearly missing.